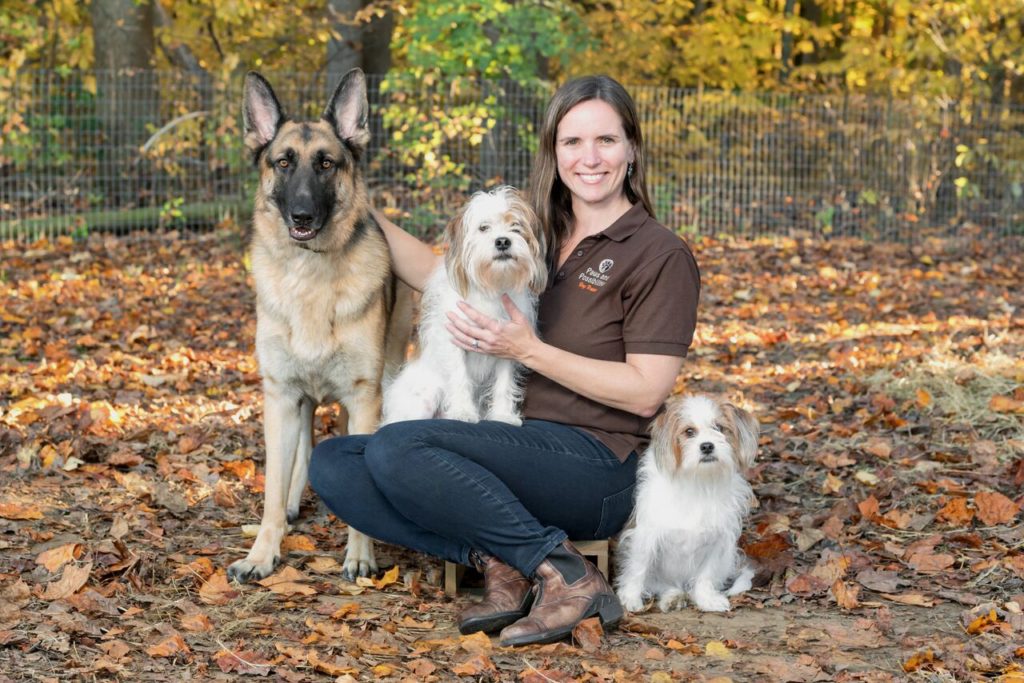 Kim with her German Shepherd, Boomer and her Shih Tzu mix sisters, Molly and Abby.

Kim Greco, Owner of Paws and Possibilities, knew from an early age that she was drawn to animals and has had pets of all kinds. Growing up in Northern Virginia, riding and showing horses were a big part of her life. Kim was ranked 3rd in the country while showing her horse, Harbor Bay, who has been mentioned in magazines as one of the best hunters to ever step foot in the show ring.

After graduating from the University of Vermont with a Bachelor of Science degree in Biology and a concentration in Psychology, Kim began her professional career as a marine mammal trainer.

Kim had the opportunity to work with Atlantic bottlenose dolphins, California sea lions, harbor, grey, and harp seals, African penguins, and exotic birds! Spending most of her marine mammal training career at the National Aquarium in Baltimore as a Senior Trainer, Kim helped to teach new trainers how to train the dolphins.

Kim’s calm, confident demeanor make her interactions with animals remarkable to watch. In addition to working well with animals, Kim has a natural gift to relate well with people and has the ability to simplify complex ideas and present them in ways that enable people of all skill levels to understand and retain them. Both of these qualities have lead to a successful career working with dogs. Kim is a professional member of the International Association of Canine Professionals (IACP).

Kim enjoys spending time with her family – her husband, her two children, her three step-children, and her two dogs. Ballroom dancing is her favorite hobby and after competing at the Chesapeake Ball has declared salsa as her favorite dance! Kim has also competed in several triathlons, loves to read, and cherishes time spent with good friends!

“I never take Pippa out downtown in Annapolis without someone stopping me and telling me what a well-behaved dog she is!” Peggy, Annapolis, MD 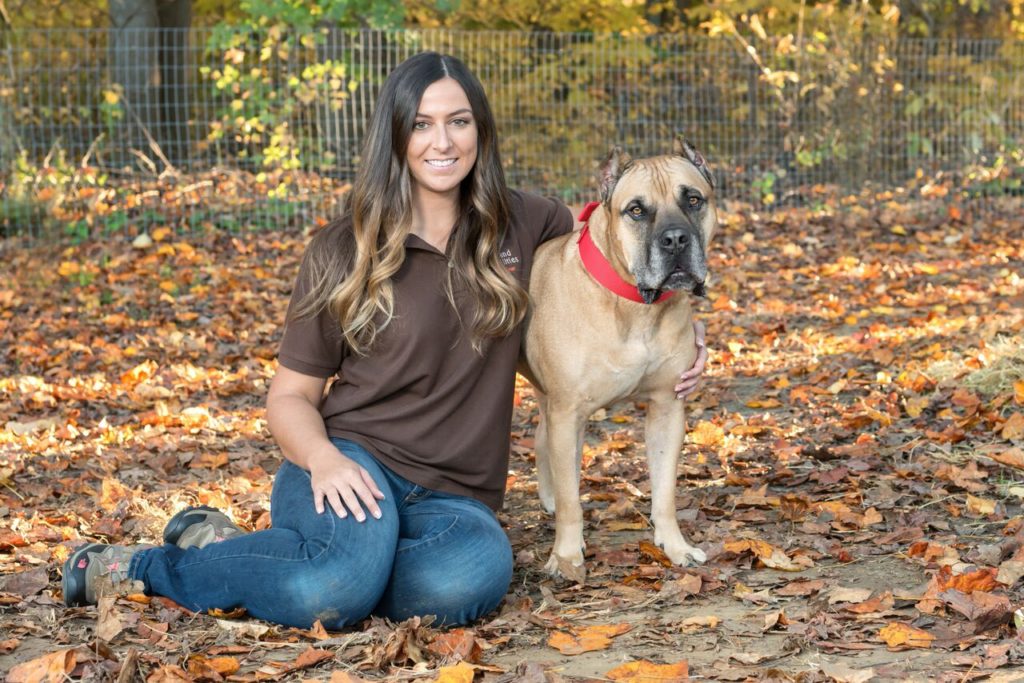 Lauren Dobelbower was first exposed to dogs as a child and has been around them ever since. Pets were always considered part of the family, and Lauren was taught at an early age that all animals should be treated with respect and compassion. Growing up, she developed a strong interest in protecting and caring for animals to ensure they were happy and healthy.

While completing her Bachelor of Arts degree in Environmental Studies at Rowan University in Southern New Jersey, Lauren worked as a part-time dog trainer for a leading pet supply retail company. After graduating at the top of her class, Lauren obtained a position as an Environmental Scientist. Before moving to Maryland in the fall of 2012, Lauren also worked as a trainer and dog walker for Balanced Dogs, LLC.

Lauren, a member of the International Association of Canine Professionals (IACP), has a natural ability to empathize with dogs and to understand their needs. By presenting herself in a calm and confident manner, she is able to gain the trust and respect of both dogs and their owners. Lauren excels at training her dog, Vinny, who is the only Presa Canario certified by Pet Partners in the country as a pet therapy dog.

In her spare time, Lauren enjoys relaxing with her friends and family. Her favorite hobbies include spending time outdoors, reading books on ancient history, and going to the movies. 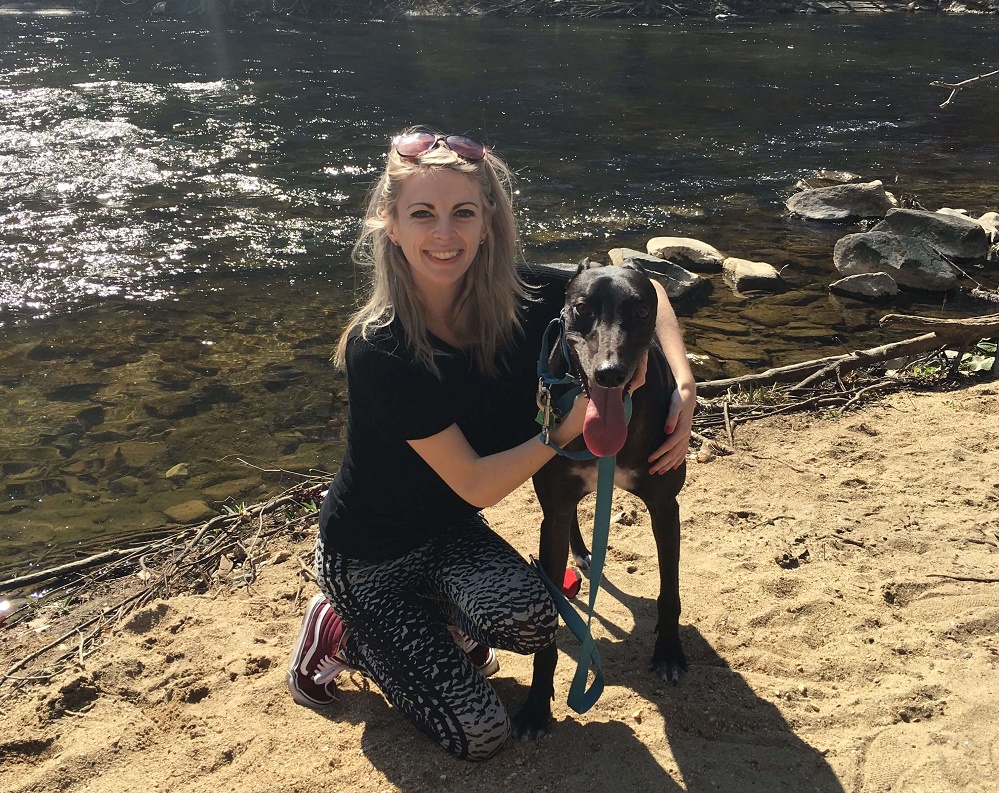 As a child, Kara found comfort in her furry friends and was naturally drawn to the animal world. Kara graduated from Loyola University with her BA in Psychology and is now attending Johns Hopkins University where she will receive her Masters in Clinical Mental health counseling.

Kara rescued a greyhound with behavioral issues and called Paws and Possibilities for help. Seeing a drastic change in her dog, she was very intrigued by the training process.

Kara decided she wanted to be part of the team that so dramatically changed her relationship with her dog for the better. She also found training her own dog was very therapeutic and plans on integrating that into her work down the road as a mental health practitioner. She has always seen the connection between the human world and the dog world, and hopes to make an impact in both. Kara enjoys spending her days with her dog; She also enjoys spending time with her fiancé, long boarding, photography and traveling. 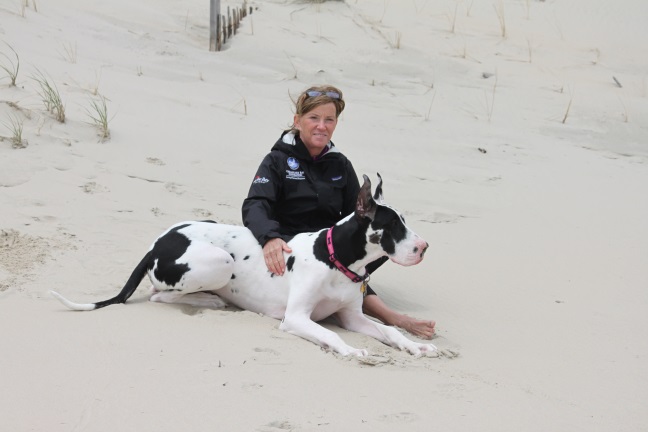 Shelly comes from a long line of dog lovers. There has never been a time when her family unit hasn’t included a dog or two, mostly Great Danes.

In the 1990’s Shelly owned and operated Arundel Pet and Pony, a Pet Supply store in Edgewater MD. This offered her the opportunity to surround herself with dog lovers in the community. She would often host Yappy Hours, Puppy Socialization and Basic Obedience classes at the store.

As a certified pet nutritionist she assisted her customers in choosing the appropriate diet and proper products to keep their pets happy and healthy. Shelly has earned AKC Companion Dog titles on three of her past Great Danes. Shelly loves witnessing the amazement that dog owners experience when they discover, adopt and implement the “secrets” offered through Paws and Possibilities.

In her spare time Shelly loves entertaining and spending time with her family and friends. Her hobbies are golf, swimming, gardening, and playing with her grandchildren and “grand-dogs.” 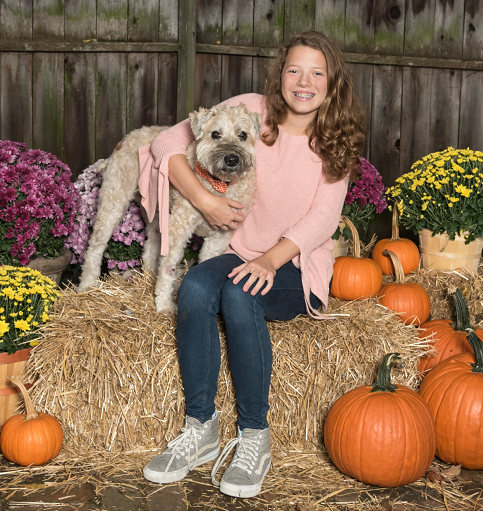 Alex Marek is a freshman at Annapolis High School in the IB program. Ever since she can remember Alex has had a strong interest in animals, especially dogs. Unfortunately, Alex lost her best friend to cancer in 2018. Guinness was a Wheaton Terrier that her family rescued in 2008 when he was 2 years old. Alex wanted to help more dogs like Guinness and joined the Paws and Possibilities team!

Recently, Alex has started a small business watching dogs of friends while they are out of town. Alex greatly enjoys spending time with the different dogs and trying to teach them a new trick or two.

ALL in-person Group TRAINING CLASSES ARE Resuming on a limited basis.