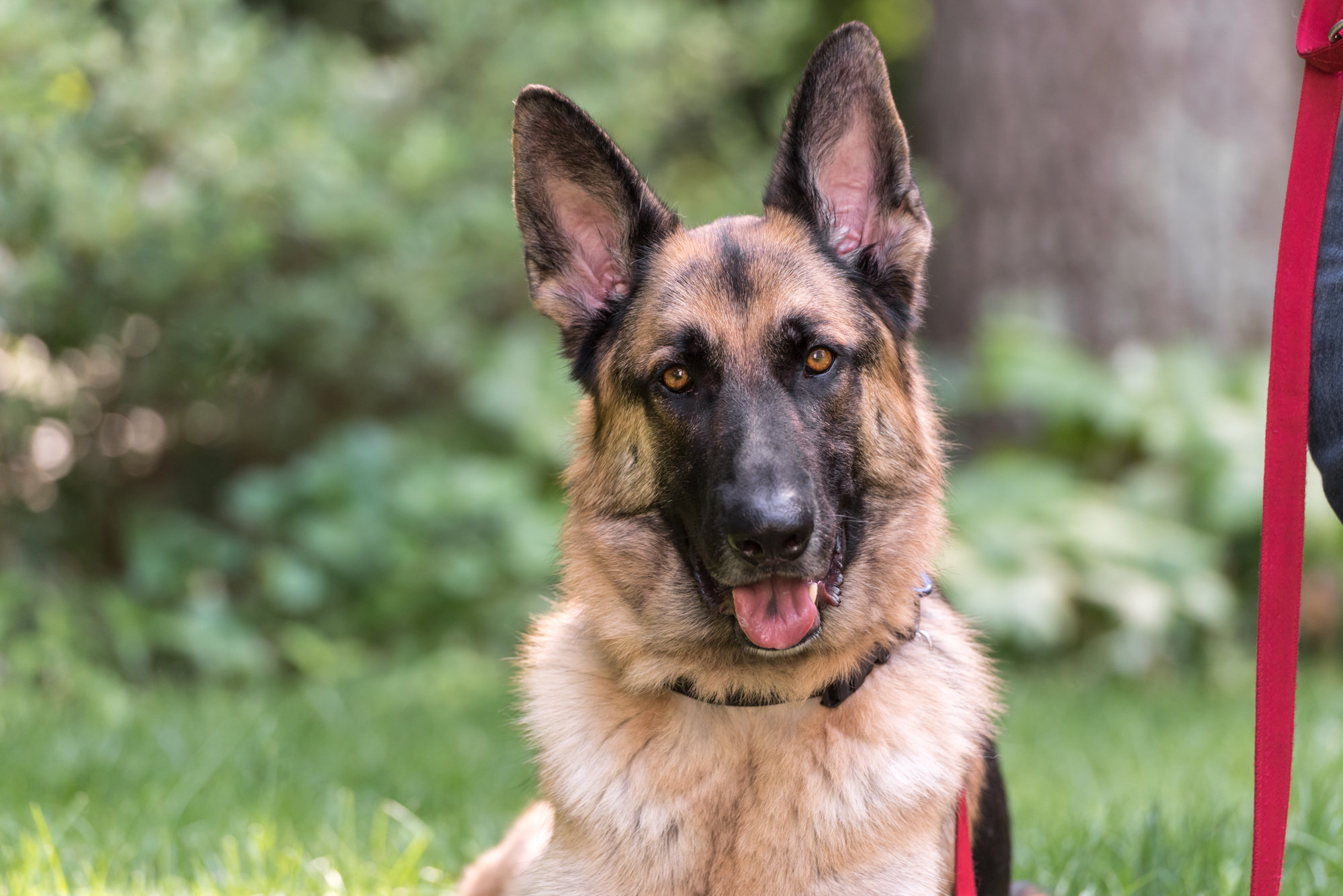 I heard a sound unlike any I had ever heard before. There are some foggy details from Thursday March 10th, but I think I actually said out loud, “was that a growl?”

Boomer, a 90 pound German Shepard, dropped the toy out of his mouth and covered the 8 foot gap between where he stood and where my 13 year old daughter stood in an instant. To say it happened fast is an understatement. His paws never touched the floor as his sheer size knocked her to the ground. My daughter’s ear-piercing scream will be forever etched in my memory.

Lindsey is fine. I don’t want to keep you in suspense. She spent 5 hours at the Emergency Room and walked away with 3 stitches, some scratches and bruises on both arms. She’ll have a small scar from yet another animal to add to the stories she’ll share throughout her lifetime (the story about the horse is another interesting one). I’m grateful this wasn’t worse.

I adopted Boomer in February 2015. He had started as a client’s dog, and we soon realized he was too much dog for their family. I decided to keep him and continued to train him every day. I learned more from Boomer than I have learned from any other dog. I’ve learned things that have made me a better trainer, and I will be able to help more people because of my experiences with Boomer. And I knew that my house wasn’t the right match for him. I was afraid that he could hurt someone.

I had him assessed by the Maryland State Police last fall. They would have liked to see a stronger toy drive, but all in all he had an impressive day. He naturally offered sniffing some suitcases as they went by him on a conveyer belt at the Baltimore Washington International Airport. He was reluctant, but got on the conveyer belt himself.  He went up and down on an escalator with not a care in the world. He passed his scent work assessment with flying colors. Mike (a retired training Supervisor for the MD State Troopers) threw a toy out into high grass. I spun Boomer around in a circle before releasing him to go find it. The goal was for him to keep looking for at least 3 minutes before giving up. Boomer found the toy in less than a minute. He climbed up on top of a car. He squeezed himself under a van. He went through a concrete tunnel. He had no reaction to gunfire.

Mike asked around to see if anyone knew someone who could use a good scent detection dog. Nothing panned out. I asked a few trainers I knew if they knew anyone who was looking for a working dog. I will always wonder… should I have done more then to find him a new home?

I am reclined on the sofa watching Grey’s Anatomy (don’t judge me!). Boomer was acting normally, alternating between playing with a toy and lying down on his bed. I hear the door at the top of the stairs creak open. I looked at the clock because my kids were supposed to be in bed by 9:30pm. It was 9:33pm. It’s funny how during a traumatic event sometimes you can’t remember anything and sometimes you can remember every minuscule detail. I imagine I will always remember 9:33pm.

I was getting ready to have a conversation with my child about how they were supposed to already be in bed. I took a deep breath – willing myself to be calm, cool, and collected. I looked up to see Lindsey standing at the bottom of the stairs with a towel wrapped on top of her head after just getting out of the shower.

The parental lectures about bedtime on a school night went out the window and a dog training session started, in an instant. She had a towel wrapped up on her head, and she didn’t look anything like what Boomer was used to seeing. My head swiveled quickly in his direction as soon as I saw Lindsey. My only thought was:

This is something Boomer would react to.

I said, “Lindsey, say something so Boomer knows it’s you. You look a little odd with a towel on top of your head like that.” She said, “Hi, it’s me!” She spoke normally. She didn’t act strangely. I watched Boomer the whole time to see if his body language would change at all – I still couldn’t believe he was so calm.

If you are new to following me or don’t know much about our training philosophy, let me share something I have taught a thousand times:

If you are thinking to yourself, “Wow, I can’t believe my dog isn’t _____,” then you should be reinforcing your dog.

I followed my own advice. What went through my head was, literally, “Wow, I can’t believe Boomer didn’t react to her.” So, I reinforced him. I released him off his bed. He picked up a toy and bee-lined straight to me. He never even took a sideways glance at Lindsey. I was petting his head and said to him, “I am so proud of you, buddy.” He was calm. Relaxed. Comfortable. Playful. Sweet.

Then… Lindsey took one step in our direction.

And it all happened so fast.

I don’t even know how that’s possible. But it’s the best description for how I experienced what happened next.

Boomer growled and launched towards Lindsey. He knocked her to the ground.

I moved faster than I’ve ever moved before. I screamed “NO” as loud as I could. I wouldn’t recommend that as a plan of action, but that’s what happened. I yelled so loud my throat hurt for the next 24 hours. As I scrambled to my feet, I grabbed onto Boomer’s hips and I distinctly remember thinking: I will grab him, and he will probably bite me.

I grabbed him anyway, literally hoping he would bite me and stop biting my daughter. I didn’t hesitate. The mamma bear in me came out. I would have done anything, endured anything, to have Boomer stop biting Lindsey. I would have given anything to trade places with her.

As soon as I touched him, he whipped his head around and knocked me in the side of my head with his head. (I got a black eye.) I remember bracing myself, thinking, “Here it comes.”

And he stopped. Like a light switch. I grabbed his collar and walked him to the nearest door, a storage room, and had him go inside.

Lindsey had scampered across the room to the other side, putting as much distance between her and Boomer as possible. She had blood streaked across her arm. I dragged a small carpet over and had her sit on it. (I’m embarrassed to say I was trying to minimize the amount of blood that got on the carpet. How could I have thought about that in the heat of the moment?!)

My mom came downstairs. I asked her to hand me a paper towel with water on it. And I told her not to open the door to the storage room, where Boomer was silently waiting. I was assessing Lindsey’s injuries – not much blood. That’s a good thing. Lindsey was calming down.

I’d take her to the hospital to be sure all her cuts and scrapes were cleaned as well as possible because I am keenly aware how easily dog bites can get infected. All of this is running through my head. I helped Lindsey to the car and went back downstairs to move Boomer to his crate. He couldn’t have been better. Except for the part when he attacked my daughter.

With an official bite on record, Boomer was required to have a 10 day quarantine. I was scheduled to go out of town the following day so I arranged to have the quarantine done at animal control. He is still there now… 18 days later.

As I write this, I don’t know what will happen to Boomer. I have spoken to several dog trainers that specialized in rehabilitating aggressive dogs, and I am left knowing there are two options for him: rehoming to a working job environment (law enforcement) or putting him to sleep.

I am sharing this story with you because I want as much good to come of it as possible. If you own a dog that is not a good match for your family, it’s okay to do something about it before someone gets hurt. It’s never been an option for me to take him back into my home since this happened, and it’s not because I don’t think I could still work with him. I know there’s a lot of training I could still do with Boomer to continue to have a positive impact on him. And I’m not willing to put my dog’s interests above my own children. I don’t want any one of my kids to ever feel like they aren’t safe. That is my top priority in life. If I have to put Boomer to sleep to protect my kids, I’ll do that.

A lot of people follow me on Periscope and I typically broadcast daily. I haven’t been live since this happened. I have gone off the grid to be with my family. I wanted to authentically share with you what happened to have me disappear so suddenly. And to share with you that I will come through this stronger than I went into it. I will be a better dog trainer.

And, most importantly, I will be a better mother knowing that nothing will ever stop me from doing everything I can to protect my kids.

12 Comments on “My Dog Bit My Daughter”