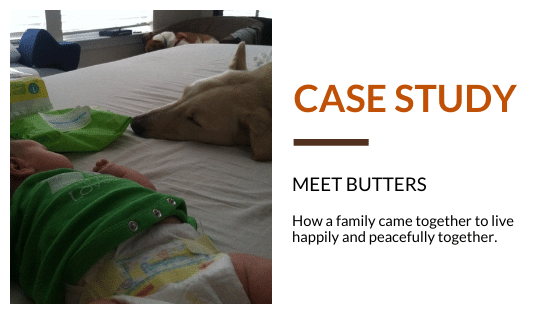 This story comes from a client who had a seemingly impossible problem: she was pregnant and had a dog that disliked babies. Here’s how we worked with her dog, Butters, how we helped her save her family unit.

Paws and Possibilities saved my family! I was pregnant with a dog that dislikes babies. A friend on mine brought her baby to visit for the first time two weeks before my due date. When she walked into my condo with her baby, and my dog, Butters, went ballistic.

He immediately lunged towards the baby and barked like a maniac. In the two years we’d had him, he’d never acted this way. His reaction was so intense that my friend left and my boyfriend wanted to re-home him the following day; I was in panic mode.

I managed to buy Butters a couple of days to see if I could figure out another option, but I had no idea where to turn. Having scoured the internet, I found Paws & Possibilities. I sent them an email, but it was late Friday afternoon, and all the other places I’d called were closed.

After reading what they offered, I remember thinking this seems too good to be true, they provided in-home training?! Until Paws and Possibilities, I assumed I’d be in the hospital while my boyfriend was home with some trainer guy teaching Butters how to sit/stay… suddenly, Kim Greco responded!!

She not only told me that she could help; she actually followed it up with a phone call- I can’t even imagine how crazy I sounded. She was so calm and just kept telling me she would do whatever it took to make sure I wouldn’t have to re-home my dog. Knowing I was scheduled to have a baby in 2 weeks, she arranged for Aleah, a wonderful tech, to come pick Butters up and bring him to Sarah – the miracle worker who trained Butters for a full two weeks.

Sarah called me before Butters arrived to gather information; she was so friendly and warm. She has kids, so she assured me this could be done. It was clear she cared about my situation as much as she cared about helping my dog. Throughout the weeks Butters was being trained at her home, she would send detailed emails and links to YouTube videos showing exactly what she wanted me to see during those days training.

I was able to visibly see what she was doing with him daily and get updates via email! I watched him learn how to comfortably stay in a cage to walking outside with a baby to SLEEPING AROUND A BABY- she even taught him to be comfortable around a toddler/kids!! She was also very responsive. If I had a question, she would respond right away, sometimes really late at night. After Sarah and he went over training techniques, my boyfriend picked him up, and then she came to us for a final session a week later.

It’s now been six months, and things could not be better. Thanks to Paws and Possibilities, Kim and Sarah, my family is living together- happily and peacefully. They really did save my family.