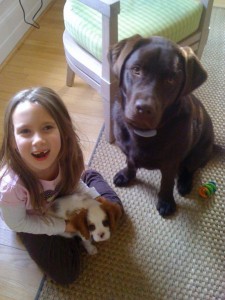 Last week my daughter, who just turned 8, asked if she could do a training session with our dog, Tucker. Of course! I then asked her if she would like to train a new behavior, and she was thrilled. Lindsey asked if she could train him to do an “army crawl” like she had seen one of my client’s dogs do one time. She has been using a clicker for a few years so she is already quite proficient with understanding that the timing is important so she made quick progress! There were a few times where she was late with the click (after Tucker had stopped “crawling”) and even once she clicked when she meant to say “wrong” because he had done the wrong behavior. It’s an easy mistake, one that my clients make all the time, and that’s the cool thing about clicker training…. it’s very forgiving. What matters is that MOST of the time you are accurate and have well-timed clicks. Lindsey is thrilled to see the progress of Tucker learning something new. Tucker is thrilled for the extra attention (and the extra treats). And my 5 year old son, Evan, hasn’t been left out of this process, either! He wants to help train Tucker to “close the door” by pushing it with his nose! It’s a win-win situation for everyone involved!