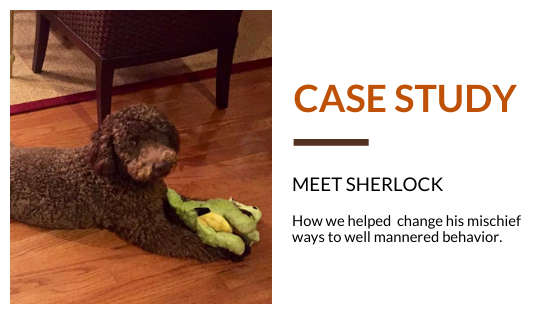 This story comes from a client who was seeking support with their dog, Sherlock, who kept getting into mischief. After training with us, Sherlock turned his investigative ways into well-mannered behavior.

It has been almost three months since Sherlock did board and train with you, and he is continuing to do outstanding! We noticed a difference with him right away in the first couple of weeks in that he was just better mannered overall, listened more attentively, and seemed much more focused generally on what we were asking of him. Of course, he still has occasional puppy moments (a box of shredded kleenex earlier this week is proof of that!), but on every level, he has maintained what he learned at your house then continued to improve on it. Specifically, I wanted to point out two occasions that he excelled at which would not have been possible without your training.

First, we hosted Christmas this year and had a full house of people, including a formal sit down dinner complete with china, crystal, etc. for 15 people on Christmas Day and another ten or so in and out throughout the day. There was lots of food on the counters, scattered around the house, and plenty of temptations on the table with lots of breakable objects. Also, many people were arriving and departing, so tons of activity. Sherlock handled it like a pro. He was friendly, greeted everyone without jumping, resisted temptation like a champ even when tempted with turkey on the countertop. He went near it, looked at it, and backed away with a look of longing in his eye, and never once tried to get near the tabletop or the ornaments on the Christmas tree.

We had trained him in advance not to approach the tree or the table using the clicker, and your coaching, so we’re thrilled it all went so well. Second, we hosted our annual holiday after-party in mid-January, and a record crowd of over 70 people attended over a four hour period. Once again, Sherlock stepped up like a pro — he was very good at not jumping on people, was good at backing off when a couple of the small children unused to dogs were nervous around him, and basically trotted around mixing and mingling like a natural host. We got so many compliments on him as everyone was amazed how well behaved he was with such a large crowd and even more so since he was only eight months old at the time.

He definitely has come a long way, and a lot of that is thanks to the individual and group training he received from you and from Lauren and the others. At the dog park and doggie daycare, we are constantly being complimented on how well socialized he is and how well behaved he is in addition to how well he plays with others. We are still working on a few things like “come” as that seems to be the hardest thing for him to focus on, but in general, he continues to respond well to everything that we have tried to teach him thus far. I took him to a couple of therapy dog training classes, and he seems to be doing well there too so I hope to take him back in March once my schedule calms down again. If you think other types of classes might be good for him to keep him challenged, let me know as he definitely enjoys the training environment, and I want to keep him engaged.

Thanks so much for everything you and your team have done thus far to help us give him the tools he needs to be such a fun and awesome puppy to have around. We feel very lucky to have such a great little guy and to have found you all to help us make him even better!