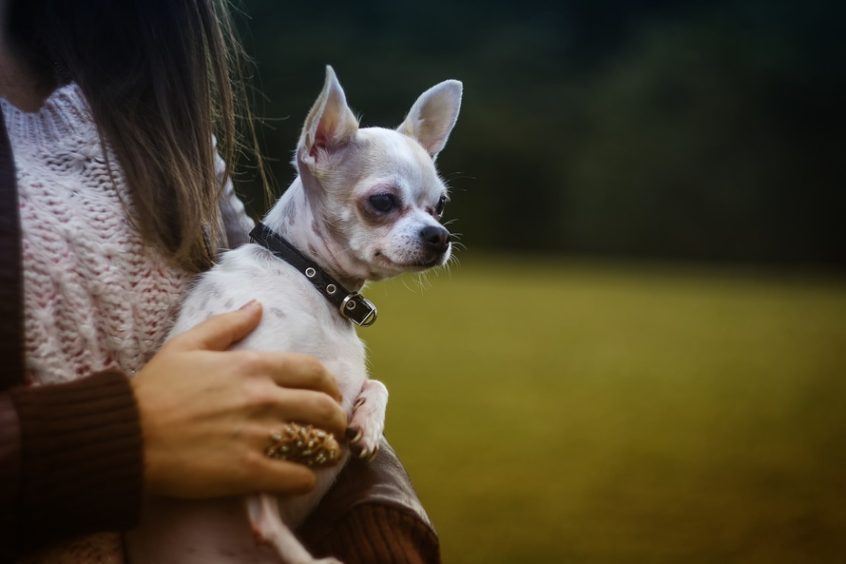 I was at Betsy’s* house this morning for the first time and I met her 3 dogs, one of which is reactive to strangers. Luke’s* barking and growling at new people when he sees them is embarrassing and potentially dangerous. Betsy gets anxious when friends come over to her home – so much so that she is reluctant to invite people over. She puts Luke in his crate when she has company, but he even barked and lunged at a girl who was over at their house recently when she walked near his crate. Betsy has worked with two other trainers before she called Paws and Possibilities. She thought there was “no hope” and that Luke was “untrainable” since she had not been able to get him to stop with everything she had tried so far.

Earlier this week, Luke got out of their back yard and was loose in the front of the house barking at a woman walking by on the sidewalk. Betsy went outside in her bare feet (burr!) and pajamas to call him. He would not listen to her no matter what she did and he kept barking at their neighbor. The infamous shaking of the treat bag didn’t even work to get Luke’s attention! Betsy called frantically inside for her husband to come to the rescue. Luke always listens to him!

Steven* ran downstairs and outside to put an end to the nonsense. Luke ignored him, too. Luke was getting closer and closer to the woman walking by on the sidewalk and the barking was getting more and more intense. Finally, Steve was able to get close enough to Luke to grab him and drag him back inside, still barking.

Betsy called me before she had finished her morning cup of coffee – upset and stressed that things had gotten this bad. She told me she had been through “two rounds of obedience training” and still could not control him. She said it was “driving her crazy” because she’d never owned a dog as challenging as him. Her veterinarian and several other people had recommended Paws and Possibilities for training and asked me if there was anything I could do to help.

Yes, of course, I could help her.

When I was standing in her kitchen talking to her about Luke, I asked what they had tried that had not worked. This is what she told me:

“The other trainer I worked with had asked me to spend between 30-60 minutes a day training Luke to do a behavior called “push-ups.” The goal was that, on command, I could say “push-ups” and Luke would alternate between sit and down repeatedly until she told him to stop.”

Then, get ready for the kicker, Betsy told me that the other trainer had instructed her to ask Luke to do “push-ups” whenever he barked or growled at someone.

I think my jaw literally dropped to the ground when she told me this. And if yours didn’t when you read this, then go back and read every blog I have written and watched every Periscope I have broadcast and saved on YouTube. You should be as shocked as I was. This is the most common mistake trainers make – they tell their clients to distract their dogs to get them to stop the inappropriate behavior.

In other words, the “professional” trainer told her to reinforce her dog for doing the ONE thing she wanted him to stop doing.

Her previous trainer had told her to “distract” Luke to get him to stop barking. I can’t think of a common way to “distract” a dog without also reinforcing him. Think about it. If I wanted to distract a dog, I would talk to him, pet him, make kissy noises to get him to look at me, play with a toy with him, or ask him to do a behavior I had taught him. Every one of those situations would be reinforcing to a dog. Reinforcing behavior I don’t want, last time I checked, is not an effective way to get my dog to STOP doing it!!

Reinforcing behavior you don’t want is not an effective way to get your dog to STOP doing it. Click To Tweet

Here’s another aspect of this story. Her previous trainer had told her to spend 30-60 minutes a day training push-ups. Betsy had said to me, “I have a confession, I didn’t spend that long training Luke every day.” And Betsy thought that it was her fault Luke’s behavior didn’t get any better. I think it’s unrealistic for most people to spend 30-60 minutes a day on training their dog above and beyond everything else they do to care for their dog like walking and playing with them.

Here’s what I told Betsy about that. If she HAD spent 30-60 minutes a day training push-ups, I would imagine Luke would consider push-ups his FAVORITE behavior. It’s the one behavior he would have had the most reinforcement for and, over time, the behavior would continue to increase in value to Luke. So not only are you reinforcing Luke when he offers a behavior you don’t want (barking) but you would actually be reinforcing him with the behavior that is the most reinforcing to him.

I told her I was surprised Luke didn’t actually start reacting – barking and growling – MORE after following this other trainer’s recommendations.

It would not have taken much for Luke to learn that when he barked and growled, he’d be asked to do push-ups, and then get reinforced for it. Some dogs would, in this scenario, actually bark and growl just so you would ask for push-ups, which they would readily do, so you’d reinforce them.

Good news is that Luke is on the right track now. We are working with Betsy to teach her how to use positive reinforcement correctly and how to be on the lookout for accidentally reinforcing behaviors she doesn’t want. We use a system that’s simple to learn and doesn’t take much time each day to get incredible results. Our proven system is so simple, in fact, we teach it in our online dog training program to people all over the world without every having to meet their dog! We are teaching Betsy how to communicate clearly with Luke and are looking forward to relieving her stress she has when people come into her home.

* Names of clients and of the dog have been changed.

Use coupon code mmbf2021 to save 50% off
all Manners Matter courses.
Coupon is good Friday, November 26th through Monday, November 29th, 2021.