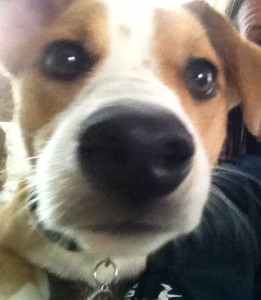 A mantra is defined as a word or phrase repeated to aid in concentration in meditation… or in dog training. There is a phrase that I say over and over, and it always helps to solve problems. When it comes to dog training, it’s my mantra:

“If you can define it, you can train it.”

And then I go to explain to people what exactly I mean by that. It doesn’t matter if your definition is simple or complicated, if you have a definition, you can train your dog. Almost every single case, every problem, every dog that I have trained where the owner has described to me a problem, or something that they want to change or fix, I can link it back to one simple issue:

The behavior has not been clearly defined.

I am standing in someone’s family room and their dog jumps on the couch. I ask if that’s okay and I hear, “Um, well… (wife looks at husband) not really, but…” Really? Now how in the world would your dog know what is acceptable behavior if you can’t decide? I would be okay with any answer- as long as there is an answer. I’d even be okay with these definitions:

Bam. Now you know how to train your dog.

Defining what you want is always the first step to modifying a dog’s behavior.

I always begin by asking you, “What exactly do you want your dog to do?” It is really, really important that there is a crystal clear answer to that question.

Most people are aware that in order to train your dog well, you need to have good “timing.” Timing matters when you are training. Sometimes I have people tell me that they are not good with the timing or they think it’s hard to get the timing right.

In my experience, if you have a clear definition of what your dog is supposed to be doing, you have good timing. Let me give you an example:

If you decide that you don’t want your dog to jump on people coming through the front door, you could create your definition as, “four paws on the floor.” Now when someone comes through the door and you are watching your dog and one or two paws come off the floor, you now know exactly when to correct your dog (and why- his feet came off the floor). This actually makes it easier for the dog to be able to figure out what you want from him since your timing is just automatically, instantaneously better.

And the flip side of that story is just as important to focus on. As soon as someone walks into your house and, at the moment your dog normally would be jumping, he’s not jumping and you are thinking to yourself, “Wow… I can’t believe he’s not jumping right now,” it’s important to reinforce your dog. I’m always coaching people that if you ever are thinking “Wow, I can’t believe… (fill in the blank)” you need to be reinforcing your dog. He is making a good choice, in the moment, all by himself, without your help, and you are impressed by him. So tell him.

You can always change the definition any time you want.

Do you have the right definition for what you want? Sometimes we don’t and if that’s the case, then simply change the definition. I once heard a story when I was a marine mammal trainer about some trainers at a zoo working with Polar Bears. There were three bears on the exhibit and every night they would open a gate for the bears to come into the back up area. The bears were starting to push the gate while they were all trying to be the first one into the back. Knowing the gate would break, the trainers decided to teach the bears to sit before they opened the gate. The definition was that their butt had to be touching the ground. At first this seemed simple and the bears excelled. Over time, however, there was a problem. Three months later, the bears were wiggling towards the gate with their butt on the ground and pushing to be the first one into the back! The trainer’s had left out the important part of the definition that had the bears STAY. So in a situation like that, you simply change the definition.

Think for a minute about what behavior you might get 3 months down the line if you defined not jumping for your dog as four paws on the floor versus your paws can’t touch me. One version is a dog who is greeting you politely and one version you may mistake your dog for a kangaroo as he jumps up to greet you without touching you. It’s a big difference in behavior and it is directly linked to your definition.

The first step is to define it. Without that, it’s hard to train.

1) what is your dog’s problem?

2) what is your definition for your dog?

I’ll answer your comment with some coaching to help you fix your problem.

If you enjoyed this post, share it with your dog-friendly friends. They will thank you for it.